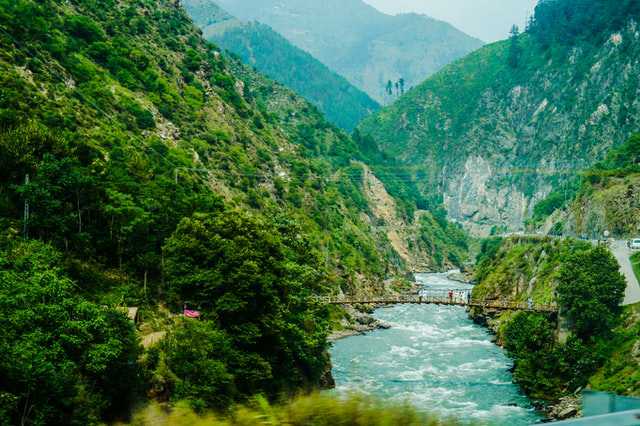 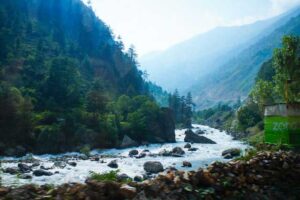 Summer temperatures can reach 20 degrees Celsius, while winter temperatures drop well below freezing due to heavy snowfall. Even though the region’s residents are accustomed to harsh winters, they migrate to much warmer areas of the valley to avoid the bitter cold.

However, the region’s average temperature has risen in recent years, which is not a good thing in the long run because it can lead to a variety of environmental problems. Tourists are advised to come well prepared for cold weather, as snowfall can occur even during the summer months.

Places To Visit In Naran Kaghan 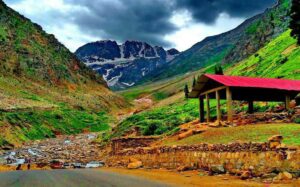 The Babusar Pass, located at the highest point of the Naran Kaghan valley, is famous for its breathtaking views of the valley. The area is best visited between July and September, and it is accessible by car. The views can be enjoyed while sitting and eating delicious local food from the kiosks located throughout the park. 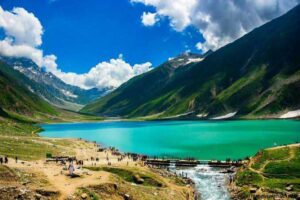 Another well-known tourist attraction in Naran Kaghan is Jheel Saif ul Malook Lake, which can be reached via Naran and is about nine kilometres away. The Lake is said to be named after a Persian prince who fell in love with a fairy, according to local folklore.

The lake is formed by melting glacier waters and is one of Pakistan’s most beautiful lakes. At times, the trout fish found in the lake’s water can weigh more than six kilogrammes. Ansoo Jheel is another well-known valley lake. In English, the word ‘ansoo’ means ‘a tear.’

The lake was given this name because of its shape, which resembles a large tear. There are no roads leading to the lake, which must be reached by trekking through the treacherous snowy terrain. Tourists, on the other hand, can enjoy many beautiful views in the area.

Due to harsh weather conditions, the lake is inaccessible during the winter months. 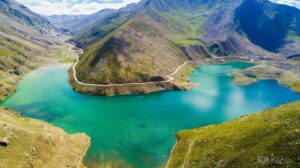 Lulusar Lake, located in the Kaghan Valley, is another beautiful destination in Pakistan. Because of its highest mountain peaks, the area is a popular tourist destination. The snow-covered high mountains provide visitors with a breathtaking view.

The middle of summer is the best time to visit because there is less snow and more greenery. Because the lake is located in the Lulusar Dudipatsar National Park, animals such as foxes, black bears, hawks, Himalayan snowcock, lynx, and marmots can be seen.

Furthermore, hikers can enjoy the experience and stay for a night or two if they wish. If you’ve ever been to Woburn, the strolls through these open spaces will remind you of the parks there.

The Lulusar Lake, located 25 kilometres from Naran, is well-known for its clear waters. The lake’s waters appear to be turquoise in colour, with reflections of the sky and clouds visible on its surface. Other lakes in the area include Saral Lake, Dudipatsar Lake, and Gitidas Lake. 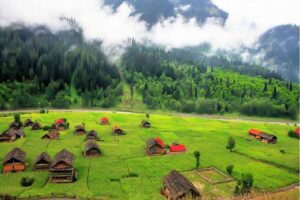 Shogran is another well-known location near Naran, known for its beautiful meadows and mountain views. It is easily accessible by road, but it is only recommended for visits during the summer months because only one or two lodges are available for rent during the winter.

Trekking from Shogran can take you to Siri Payee, which is known for its grassy plains and tranquil environment. 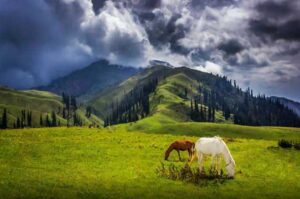 Siri Paye is a green carpeted land surrounded by clouds and awe-inspiring scenery of snowy mountains. Siri Paye Meadows and Siri Lake must be visited during your Shogran tour. The road from Shogran to Siri Paye is not in good condition, but this location is worth seeing.

Naran is without a doubt one of the most beautiful places to visit in Pakistan, but it is also one of the most vulnerable to environmental threats due to garbage and climate change.

Many improvements will be required by the government, locals, and tourists in order to preserve the region’s beauty for future generations. It is a valuable asset for our country that must be protected and nurtured in the future. 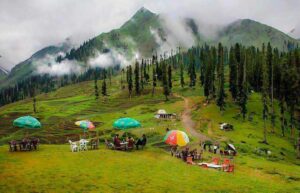 The lovely tourist destination is near Naran in the Kaghan Valley village of Batakundi. The area is covered in wildflowers, fir forest, and pine, creating a lush green meadow. A deep valley near the Kunhar River runs through the area on one side. On the other side, you can take in the stunning view of the hills and dark alpine woods. People come from all over the world to admire its beauty.

From here, you can also see “Falak-Sar,” (a snow-covered peak). This amazing destination can be visited by taking a thrilling muddy jeep ride through a small one jeep track. This road can be hazardous during the rainy season because it becomes slippery due to mud. We provide the best Naran Tour Packages so that you can enjoy them without difficulty. 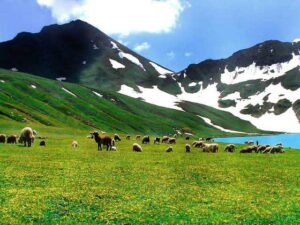 Next on the list is Dudipatsar lake, located in the far north of Naran Kaghan valley. Dudipatsar means “White Mountains Lake” because the peaks surrounding the lake are covered in a white shawl of snow all year.

Furthermore, because of its majestic beauty, this lake is known as Pakistan’s “Queen of Lakes.” This destination can be reached by driving until Jalkhad in Naran valley. After the drive, the traveller must enjoy a 4-5 hour trek through breathtaking scenery.

The best time to visit this piece of nature is between June and August. Following that, the destination may experience heavy snowfall, causing the visitor to become stranded. This lake is 3800 metres above sea level and surrounded by lush green pastures. To persuade you, travel companions, to visit this magnificent destination in Pakistan’s Naran Kaghan valley.

Where To Stay In Naran Kaghan 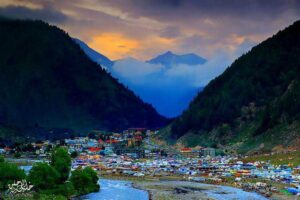 Naran has many hotels and hostels to meet the needs of tourists of all income levels who come to see this beautiful landscape. Instead of paying for accommodation, tourists can set up their own tents in the form of camps if they so desire.

Some hotels also provide accommodation in the form of camps. Recently, there has been an improvement in the region’s overall infrastructure, which has resulted in an increase in tourism. 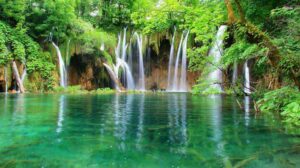 Why Is Naran Kaghan Famous 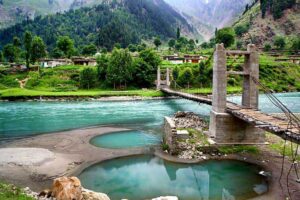 Naran Kaghan is well-known as a tourist destination, and because of its pleasant weather during peak season, thousands of visitors flock to the valley each year. In the summer, it also serves as a gateway to Gilgit Hunza via the Babusar Pass. During the summer, Naran Bazaar becomes extremely crowded, with hotels and restaurants offering their services.

Things To Do In Naran Kaghan 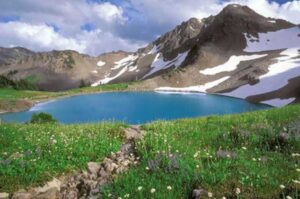 It is said that you should be fortunate enough to see the lovely Ansoo Lake. Because sometimes, after hours of arduous hiking, you can’t see the lake because of fog or rain. The path to the lake itself has many wonderful and picturesque attractions for visitors. A hill appeared after 5 hours of walking.

When you look in a different direction from the top of the hill, you will see Lake Ansu and think to yourself, “I’m here, that’s what brought you here, away from the crowds and human society.” Going further will bring you closer to the lake’s shore. Except for July and August, the lake is snow-covered all year.

The best time for this hike is said to be between July 10 and August 15, when you can see the water reflected in the lake. 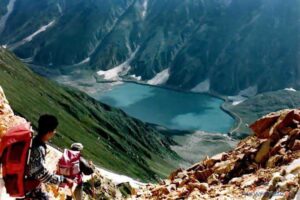 The lake is 14 kilometres away from Naran Kaghan. The journey from Naran to the lake takes about 4 to 6 hours, which is enough time for those who are physically fit to climb 3,000 feet.

This is an 8-kilometer-long hiking trail. You can reach the top of the mountain in an hour if you rent a jeep from the market. The water is crystal clear. The lake’s clear water is due to the numerous glaciers that surround the upper basin and supply water to it. 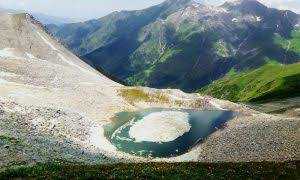 Ansu Lake is a short walk away. It takes 7 to 9 hours to travel from Saif Malook Lake to Ansoo Lake round trip. It is best to leave early in the morning. It is best to spend the night at Saif ul Malook Lake and begin the journey as soon as possible.

• Fishing At The Bank Of Saif ul Malook 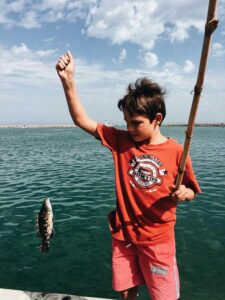 Saif ul Malook is famous for its delicious trout. Fishing is a popular pastime in the Naran and Kagan Valleys. Many tourists enjoy fishing in the clear waters of Saif ul Malook because the lake is teeming with brown and rainbow salmon. Licenses are available from the Shinu or Naran Fisheries Departments.

It is possible to bring your own fishing equipment, or you can rent it at Naran Bazar. The use of various fishing nets and explosives for fishing in rivers and lakes is prohibited. They are harmful not only to the health and long-term growth of trout, but also to other marine species. 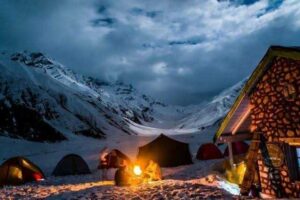 On a full moon night, camping at Saif ul Malook Lake feels like a dream. There are some campsites here, and it is strongly advised that you camp there because the scenic beauty of Lake Saif ul Malook is worth admiring at night.

However, there are cabins and camping areas near the lake. There is a grocery store for tourists, but hikers are advised to bring their own food, water, and other supplies. 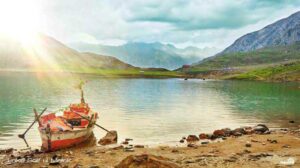 The climate in Naran is humid continental (Koppen Climate Classification Dfb). [3] Summers see a lot of rain, and winters see a lot of snow. The geography and climate of the region are Alpine, with forests and meadows dominating the landscape.

Throughout the year, the weather is typically cloudy. During the winter, the temperature frequently falls below 0 °C due to heavy snowfall. Summer temperatures rarely exceed 15 °C, despite heavy rainfall. Naran is still busy in the summer, which begins earlier, and tourism is continuing into the fall. Naran’s average annual temperature is 10.1 °C.