Sharks In Bora Bora? All You Need To Know

The sharks in Bora Bora are the most popular tourist attractions, alongside the cottages above the water, the magnificent sandy beaches, and the mountain Otemanu.

Everyone who visits the island is captivated by these exciting water animals. Nobody leaves Bora Bora without seeing the sharks.

There’s even a saying that “sharks outnumber the people of French Polynesia,” which explains the abundance of these creatures.

Are There Sharks In Bora Bora? 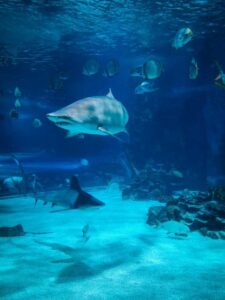 Types Of Sharks In Bora Bora 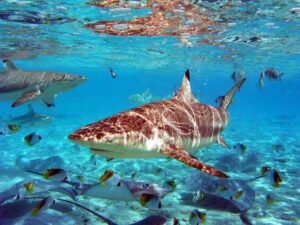 Sharks can be found in abundance in the Bora Bora lagoon and across the island’s waterways. The sharks in Bora Bora are mostly safe. They reside beneath the green lagoons and are accustomed to human presence.

Blacktip reef sharks are the most prevalent type you’ll see. Because they aren’t aggressive, you can easily approach them. They prefer to swim in inshore waters and live on tropical coral reefs. However, they become accustomed to their surroundings and do not change them for many years.

Fish and other tiny invertebrates such as crustaceans and cephalopods are the main sources of food for blacktip reef sharks. Sea snakes and sea birds are also among their prey. 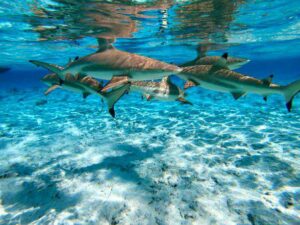 Their dorsal fin, which is visible above the water, is the most distinguishing feature. That’s how they’re perceived. They’re also difficult to miss, with a length of 1.6 metres.

Aside from them, the waters of Bora Bora are teeming with “Lemon sharks.” These are frequently observed on shark feeding cruises. That’s understandable, given that fish is their primary source of nutrition.

Don’t be concerned about not noticing them in time. These sharks may grow up to 3 metres in length, and their colour makes them stand out among the lagoon’s blue.

Whitetip sharks, grey sharks, and hammerhead sharks should not be overlooked. They, too, are regular visitors to Bora Bora’s waters, adding to the excitement of your dive.

Are There Any Shark Attacks In Bora Bora? 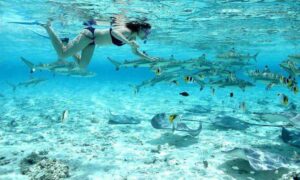 Shark attacks are uncommon in Bora Bora. According to the International Shark Attack File, only 7 shark attacks have occurred in French Polynesia since 1580.

The most recent attack occurred in 2019, when a French tourist was attacked by a shark and sustained severe injuries after the shark ripped both of her hands off while swimming in the Mediterranean.

You will mostly see Blacktip reef sharks in the lagoon, which are not aggressive and certainly not man-eaters. They will also be smaller and adolescent-like. Lemon sharks, on the other hand, are common in Bora Bora seas and can be aggressive.

Is It Safe To Swim In Bora Bora? 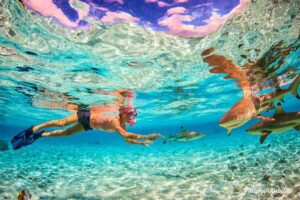 Bora Bora’s water is relatively safe for swimming as long as you don’t stray too far out. Because there are sea urchins on the seabed and you might step on one, you should wear some form of footwear. If you do end up standing in one, it will be excruciatingly painful.

Other sorts of fish in the sea include jellyfish, lionfish, and stonefish, all of which should be avoided.

When To Go Diving In Bora Bora? 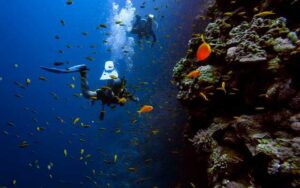 Bora Bora offers year-round scuba diving. From November to April, the summer months are in effect. Throughout the year, the temperature ranges from 25°C to 29°C. Water visibility is excellent. 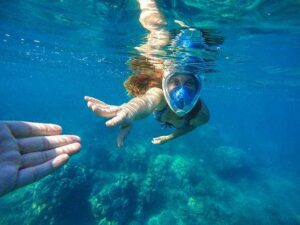 Bora Bora diving is suitable for both novice and experienced divers. Bora Bora is a volcanic island with a crystal clear lagoon that has been surrendered by a number of islands and coral reef systems.

The coral reefs and lagoon are home to a diverse array of marine life, including sharks, manta rays, dolphins, turtles, and others.

The following are some of the best diving spots in Bora Bora.

• Muri Muri – This dive site has a depth range of 10 to 40 metres. As a result, it is appropriate for all skill levels. There is a chance to see Blacktip sharks, turtles, and other sea creatures.

• Tupitipiti – The dive depth ranges from 6 to 45 metres. Here you can see a colourful coral that has formed caves and canyons that are home to a variety of marine life.

• Aquarium – A shallow dive site with a depth range of 4 to 6 metres. This makes it ideal for beginners. A wide variety of tropical fish and coral can be found here.

• Anau – Anau is well-known for its Manta Ray cleaning station. The average depth of the dive is 15 to 25 metres. With excellent visibility.

• Teavanui Pass – This dive site has a depth range of 5 to 40 metres. This is the entrance and exit to the Bora Bora lagoon, where you can see sharks, manta rays, giant Napoleon wrasses, and other sea creatures. 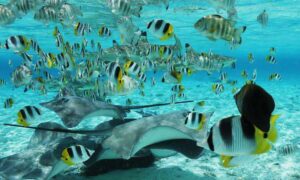 We’ve arrived at the section where we’ll look at one of the most exciting activities you should try if you visit this incredible island.

It’s the adventure of feeding the sharks in Bora Bora, of course. Everything you need to know is right here.

A feeding excursion – Taking an excursion may be the best way to get the most out of this exciting activity.

Being with someone who has more experience can increase the fun and ensure that you enjoy the swim. Viator’s excursion is an example of such an exciting excursion.

This is primarily due to the fact that you can either board a canoe and observe the spectacle from there, or you can slip into the clear water and watch the guide feed the creatures with their bare hands.

Furthermore, they include all snorkelling equipment, so you’ll only need your adventurous spirit.

Shark food – If you’re wondering what food the sharks need during the feeding, you’ve come to the right place.

Bora Bora’s sharks primarily feed on dead fish. Because they are usually smaller than the other shark species in the oceans, they eat these animals to satisfy their hunger.

Aside from that, they can be fed clams, mollusks, crabs, lobsters, and other small sea creatures.

Tips for feeding – The most important thing to remember is that sharks can be quite aggressive.

Sharks in Bora Bora, such as the Blacktip reef and lemon sharks, are accustomed to humans and behave in a friendly manner. Be cautious, however, and keep an eye on them.

However, don’t insist on feeding them with your bare hands. First, because it is illegal, and second, because of the potential dangers.

That’s why you should let the expert who will be in the water with you do their thing. Simply relax and enjoy the experience.

Those who are too afraid to even think about swimming so close to the sharks should stay in the boat and observe the feeding from there. 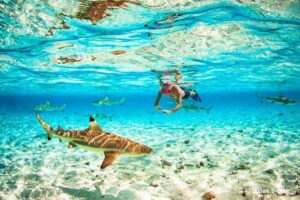 Nothing beats diving into the green waters and coming face to face with these fearsome and amazing creatures.

That exact sensation makes diving with sharks a must-do activity during your time in Bora Bora.

Now, let’s go over all of the specifics of this experience.

The best time of year – When it comes to diving in shark-infested lagoons, every day of the year is ideal.

Yes. The water around the island is extremely warm, reaching no higher than 29°C in the summer and 26°C in the winter.

This improves your diving experience. Only keep in mind that summers in Bora Bora can be rainy, but this has no effect on the water.

You can also bury your head in the water during those times, unless there are severe weather conditions and the rain lasts for days. 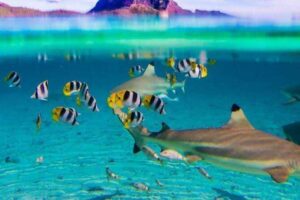 As previously stated, Bora Bora’s lagoon is teeming with various species of water animals, the most common of which are sharks.

We’ll concentrate on the experience and encounter with them for the time being because they’re the ones we’re talking about.

The sharks you’ll encounter – The lagoons are richer than you could have imagined the moment you place your head under the blue water and begin breathing through your mask.

From the incredible variety of fish, stingrays, and turtles to the sharks we’re exploring, you’ll find it all.

The most notable encounters will be with Blacktip reef sharks and Lemon sharks. They are the so-called owners of the lagoon, which is a must-see attraction.

Don’t be afraid to get as close to them as possible, but only with a qualified guide or shark expert.

Shark activities – The number of sharks in Bora Bora is astounding. They’re swimming all over the clear water, allowing you to take in their beauty through a variety of activities.

To begin, you can take a boat to the lagoon’s centre and dive into the waters in search of them.

Then there’s the risk-free shark swimming, where you can even climb on their backs, and the one-of-a-kind feeding experience.

During your time with the sharks, you will gain a better understanding of their nature and habits. If you’re a big fan of these animals, make the most of these activities.

Shark attacks – While we all know that the sharks in Bora Bora are friendly and accustomed to the presence of humans, the unexpected can happen.

Sharks may suddenly become aggressive and attempt to bite you. But don’t worry, they’re not man-eaters and won’t kill you.

Simply be cautious at all times and watch how you act around these animals. And, unless you’re certified, don’t even think about approaching them without a guide.

Shark & Ray Snorkel Safari – Tahiti’s snorkel safari is one of the best tours for getting a sense of the entire underwater life. 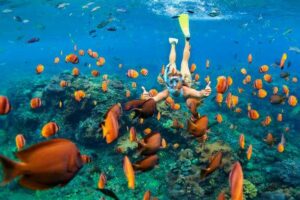 As part of this tour, you’ll snorkel in the clear waters, spotting various sharks and rays. Your guide will also take you to see the sharks and rays being fed, either from the boat or by swimming with them.

Because the tour lasts about 2 hours and 30 minutes, you’ll have plenty of time to see everything that piques your interest.

Raanui tours – For many visitors, the Bora Bora experience is not complete until they take the Raanui tours.

They are available for a full day or half day and offer a variety of ray and shark-related activities.

From shark feeding in shallow waters to diving in coral gardens to ray feeding and visiting one of Motu Tapu’s incredible beaches, you will be left speechless.

Ocean Snorkeling – Experience the underwater world like you’ve never seen it before. With the cean snorkelling tour, you can see everything you’ve always wanted to see. During the tour, you can choose to dive in 9 different locations, both inside and outside the lagoon. 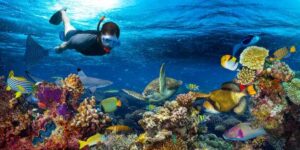 This will allow you to see the fierce shark swim close to you and fondle the rays with silky skin. Furthermore, your guide will teach you everything you need to know about the sea creatures. If you like thrills and being in the water with amazing creatures, you should definitely take this tour. 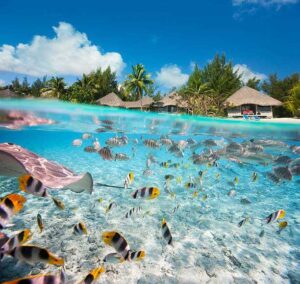 That’s all for now! I’d like to know if this guide on ” Are there sharks in Bora Bora? ” was useful to you. Please let me know if you have any questions or if you have anything else to add.

• Bora Bora Surfing And Other Activities 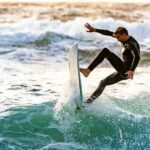 Bora Bora Surfing And Other Activities 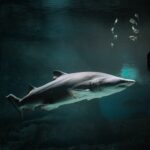 Are There Sharks In The Great Lakes? 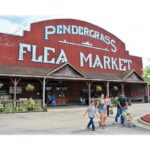