Best Things To Do In Roswell NM 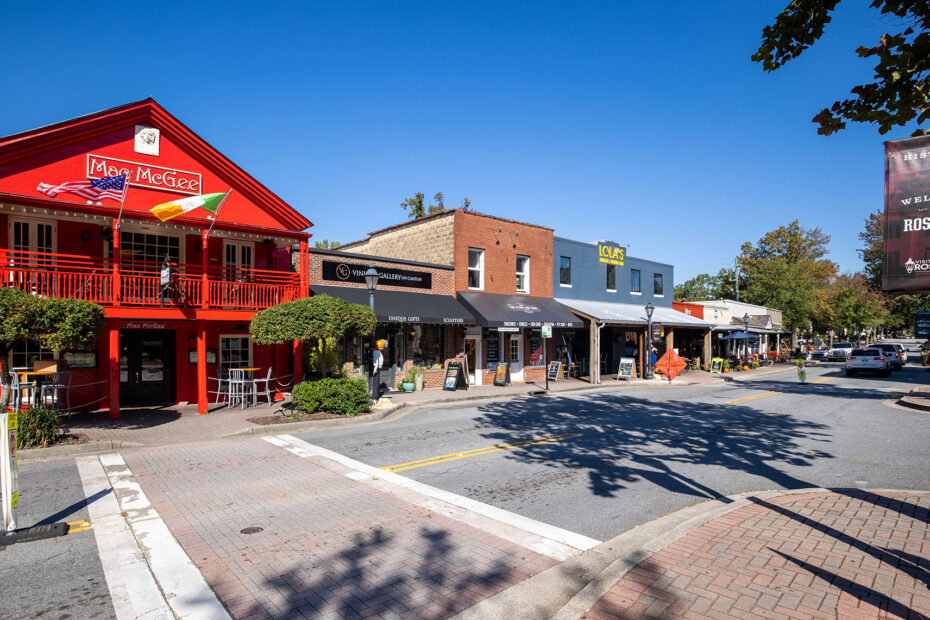 Roswell is a small town in southeastern New Mexico most known for the 1947 “Roswell Incident,” a rumoured UFO crash that some believe was covered up by the military. The municipality, as well as numerous local businesses, capitalise on the UFO theme by plastering bizarre alien imagery on storefronts and lampposts. However, there is more to learn about the small town’s past.

Roswell, which was founded in 1870, presently features five museums including UFO exhibits, weaponry displays, antiques, and antiquities. There are also a number of outdoor attractions nearby, including state parks and a variety of activities. With this list of the top attractions in Roswell, New Mexico, you can learn more about the greatest locations to visit.

Things To Do In Roswell NM 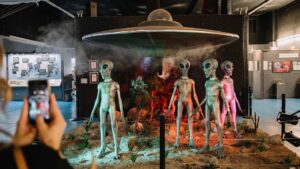 Few could have predicted that the International UFO Museum and Research Center, which opened in 1992, would become such a popular tourist destination for UFO enthusiasts around the world.

The museum’s organisation is one of its most powerful features. The museum encourages visitors to question, doubt, investigate, and learn on their own, with no attempt to persuade them otherwise.

The museum’s exhibits and information are not confined to the “Roswell Incident,” with material on reported abductions, crop circles, and the famed Blue Book also available.

Take one of the many Roswell UFO tours given by various companies in the area if you want a unique sightseeing experience. These excursions often visit notorious places like Building 84 at the Roswell Army Air Field, where many think the remnants of the crashing UFO and its passengers once lay. 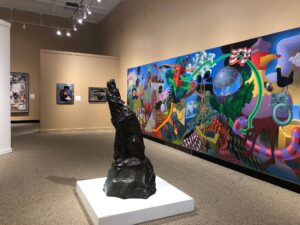 The Roswell Museum and Art Center houses a fine collection of sculptures, antiquities, prints, paintings, and photographs that focus on the history and art traditions of the American Southwest.

The museum also houses fascinating historical collections, such as relics and exhibits about the history of the American West, as well as a large section dedicated to Dr. Robert Goddard’s work on liquid-propelled rockets. 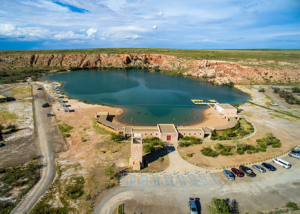 Bottomless Lakes is a state park made up of a collection of nine small and very deep lakes located along the Pecos River about 15 miles southeast of Roswell. The lakes are actually old caves that have collapsed, carved out of limestone by the river and aquifer. Cenotes are the technical name for underground leaks that feed them.

Summers in New Mexico are hot, and the lakes are a great spot to go for a swim and a picnic on a hot day. Fishing, non-motorized boating, SCUBA diving, a 3.3-mile mountain biking route, and significant bird-watching opportunities are among the other activities available in the park. A decent campground with a combination of 42 serviced and unserviced sites is also available at the park. 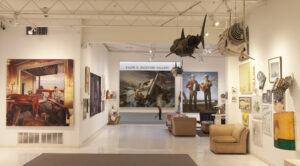 The Anderson Museum of Contemporary Art displays the work of participants in the Roswell Artist-in-Residence Program, which began in 1967, with more than 200 pieces of art displayed in nine galleries.

The museum’s collection, which includes pictures, drawings, prints, paintings, and sculpture, is wide and eclectic, with over 500 pieces. It’s a fantastic way to understand how contemporary art has changed over the previous 45 years.

In a total of 22,000 square feet of exhibition space, works of art in various mediums are displayed in 12 galleries.

One of New Mexico’s most distinctive and rare ecosystems can be found just outside of Roswell. The Pecos River, the Chihuahua desert, and the shortgrass prairie all come together to produce a year-round supply of water that attracts a wide variety of species.

Away from Bitter Lake, the geography is intriguing, with sinkholes, sand dunes, plateaus, and marshy sections. There are also 59 animal species, 20 waterfowl species, and 24 distinct fish species to be found throughout the refuge. Keep an eye out for one of the 50 reptile and amphibian species that can be seen sunning themselves on a log or rock.

One of the three walking trails or one of the two longer hiking trails is the best way to see the area. The majority of the paths depart from the main visitor center’s magnificent eight-mile-long Wildlife Drive. 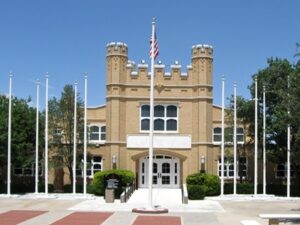 The General Douglas L. McBride Museum houses exhibits on military history and the history of the New Mexico Military Institute (NMMI), as well as the NMMI Hall of Fame, which honours the school’s most distinguished graduates.

Examples of weaponry, uniforms, insignia, decorations, and other historic relics, as well as exhibitions that further clarify pertinent issues, are included in the collections. The museum is free to the public and is located in Luna Hall on the NMMI campus.

This institution is housed in the century-old mansion of Mr. and Mrs. James Phelps White, one of southwestern New Mexico’s most influential families. The home has been fully restored and is listed on the National Register of Historic Places. It’s one of Roswell’s best museums, and it provides a fascinating glimpse into life on the southern prairies in the past.

A valuable collection of historical documents, including 11,000 images, is housed in a new building right next door to the museum.

• Spring River Park and Zoo : Things To Do In Roswell NM

The Spring River Park is a 34-acre park with numerous habitats, a children’s zoo, a miniature railroad, an antique wooden horse carousel, and a trail system with natural species. Visitors can learn about the Pecos River system, local species, and the southern Great Plains ecology, which includes prairie dogs and burrowing owls, on the Capitan Trail.

Lemurs, miniature horses, and pygmy goats are among the creatures at the children’s zoo, which also has a ranch section with miniature horses and Texas Longhorn cattle, as well as South American llamas grazing around the perimeter.

• Roswell Historic District : Things To Do In Roswell NM 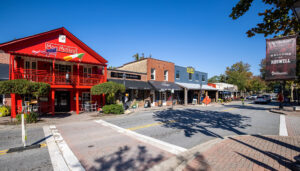 A free walking tour brochure is available from the Historical Society for Southeast New Mexico, which takes tourists past some of the city’s most notable historic residences. Hipped Box, Queen Anne, Tudor, Colonial Revival, Italianate, Mission Revival, and Spanish Pueblo Revival are among the architectural styles represented among Roswell’s oldest homes.

• Walker Aviation Museum : Things To Do In Roswell NM 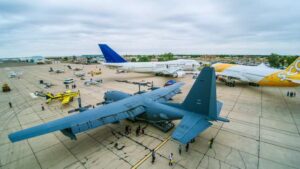 The Walker Aviation Museum, located in a wing of the Roswell International Airport, is a great place to visit while waiting for a flight or on your way to your hotel.

The museum’s displays focus on Walker Air Force Base’s service as a Cold War-era branch of the Strategic Air Command from 1945 to 1955, when the base was active. The museum, despite its small size, is jam-packed with interesting items and information.

Model military aircraft, a flying jacket, and a variety of WWII-era armaments, including Japanese rifles and bayonets, as well as German and Russian weapons, are among the collections.

Other displays include uniforms, movies, and documents, as well as flying and communications equipment. There are also exhibits about daily life at the Roswell Air Base, including cinema ticket stubs and other memorabilia from the 1940s and 1950s. 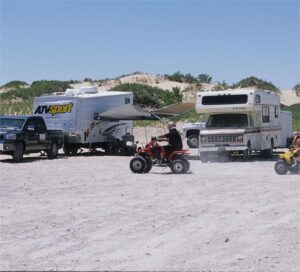 A massive mound field of quartz particles is perfect for all-terrain bicycles, mountain carts, and sand railways at the Mescalero Sands North Dune Off-Highway Vehicle (OHV), a 600-acre hill. Cottonwood trees that flourish in arid climates can also be seen in the area.

Water, on the other hand, is not available. Off-highway vehicle use, motorcycling and picnics, and RV camping in the north, central, and south parking lots are all options in this area.

The Rosewell community uses drama to entertain the Little Theater and the broader public, producing, encouraging, and inspiring interest in live theatre. Furthermore, it offers both adolescents and adults a range of possibilities to participate in all parts of theatre.

The Wizard of Oz, To Kill a Mockingbird, Sherlock Holmes, The Final Adventure, and The Mystery of Irma Vap are among the theater’s productions.

In addition, the Roswell Community Little Theater hosts a variety of educational and youth seminars for the community. Other sorts of theater-based entertainment are organised here, such as Mystery and Dinner Theater. 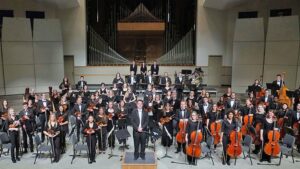 For the residents of Roswell and southeastern New Mexico, the Roswell Symphony Orchestra (RSO) presents an annual concert season. The best orchestral literature as well as music education programmes for children and young adults are among them.

The Rosewell Symphony Orchestra, now in its 55th season, offers a season with a special subscription concert series of five classical concerts given at the gorgeous Pearson Auditorium, as well as a variety of free presentations for elementary students from Rosewell, Dexter, and Hagerman. Labor Day concerts are held at Spring River Park and Zoo.

The Rosewell Symphony Orchestra performs at Pearson Auditorium, which also holds a variety of other events throughout the year. These include theatre performances, concerts, special lecturers, and dance recitations, as well as speakers and presentations at the annual UFO. Every year in July, the festival takes place.

So this was  our list of the Best Things To Do In Roswell NM, hope you guys found it useful. 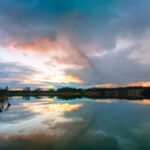 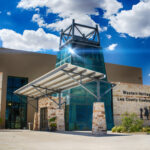 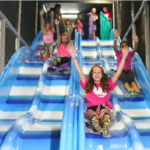 Best Things To Do In Poway CA